About - Central Mosque Rochdale
Central Mosque Rochdale > About
Central Mosque Rochdale (CMR) formerly known as Idara Taleem-ul-Islam was set up in 1974 by the local Muslim Community to address the growing religious, social, cultural and recreational needs of the newly settled Muslims in and around the Borough of Rochdale. An old church building on William Street was purchased for £20,000. With the help of donations from the local community the building was adapted to function as a mosque. The new mosque held congregational prayer five times a day as well as Jumma (Friday prayers) and Eid prayers. The mosque also provided after school classes in Holy Qur’an, Arabic and Urdu. 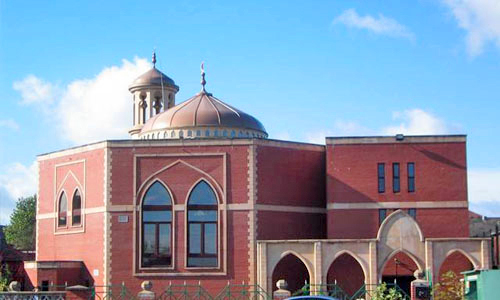 Since its inception, the mosque has continued to meet the religious, cultural, social and educational needs of the local community. As the Muslim community grew over the years, it became virtually impossible for the old church building to accommodate the ever growing needs. The whole of the building was full from the basement to the attic for the Juma prayer on Fridays often spilling into the yard causing great inconvenience. The situation was very similar with the boys and girls classes as the numbers grew every year. It was clear that something needed to be done to ensure meet the needs of the congregation. After careful consideration of all options, the management committee decided to build a new purpose built Mosque as the structure of the current building was far too weak for refurbishment and extension. For this a large one acre site across the road was bought in January 1996 from Rochdale MBC for the sum of £150,000. And so the construction of the magnificent new Central Mosque began in December 1996. The ultimate plan was to establish an ISLAMIC CENTRE (a one stop shop) that would provide a beautiful new Mosque, a large Community Centre for various community functions and a learning facility for Muslim Girls and Boys ALL from ONE SITE.
Tweets by CMRochdale